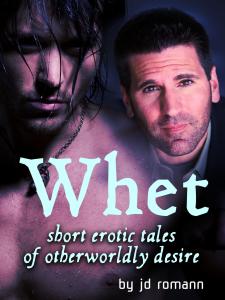 J.D. Romann’s stories have been published in two editions of Best Gay Love Stories; Friction (Best Gay Erotic Fiction); Wet Nightmares, Wet Dreams (Literotica); MindCaviar.com (Food, Sex, Literature, Art); and VelvetMafia.com. Her alter-ego has been published in two editions of Best American Erotica, seven editions of Mammoth Book of Best New Erotica, Best Women’s Erotica, and many other places. Whet is her collection of previously published literary gay erotica. Her next two m/m GFY romance novellas, Comeback and Mardi Gras Bound, will be released in 2014. She was raised by an English teacher and is a freelance editor whose motto is, “Typos are boner-killers.”

Born and raised in Hawaii, J.D. lived for a time in pre-Katrina New Orleans, where she was given all the worldly possessions of an obsessed serial killer fan who mysteriously disappeared. She still has that creepy suitcase, among other things, in her closet. She was once mesmerized by Slash’s burning lock of hair at his pre-earthquake Fenix Underground concert in Pioneer Square; the riveting moment inspired a scene in her GFY novelette, “Frigid” (included in Whet). She now lives in the gray and moldy Pacific Northwest, where her imagination continues to provide a match for her reality and she can often be found wearing her red shit-kickers. J.D. was a lousy biker so, although she loved shifting with her boot, she quit before she killed herself and now rides on the back of her man’s retro cruiser. Their 10k-mile ride together took them to inspiring places that often crop up in her stories.